Is yoga a religion?

Yoga is practiced in most settings in a completely secular way. However, for many, yoga is spiritual. Others use yoga alongside their religious practices without conflict. The philosophy of yoga can be applied in a way that respects, and even enhances, your beliefs and practices.

Yoga recommends ethics and life values as a pathway to bringing calm and steadiness to the mind and well-being to the body. The philosophy of yoga is an extension of its psychology and practices. Yoga does not consider any particular religious belief as a requirement for the practice, and one does not need to forgo any faith to benefit from yoga. The only requirement is to uphold the values of ethics and inner peacefulness.
—Ganesh Mohan, MBBS, C-IAYT, director of Svastha Yoga Therapy and Teacher Training programs 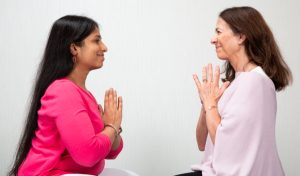 Yoga therapists Smitha Mallaiah, MSc, C-IAYT, and Tina Walter, C-IAYT, demonstrate anjali mudra, which is often used at the beginning and end of a yoga practice. Gestures like this one are also used to encourage particular energetic effects and to aid in concentration.

Yoga is a philosophy that combines a set of ethics with ways of connecting the head, hands, and heart. The ethics are common to most major religions. Some people feel the practice of yoga qualifies as a religion. In fact, the practice of yoga offers a set of tools that can be used by anyone to cultivate their sense of Awe, wherever they may find it.
—Diane Finlayson, MA, C-IAYT, department chair, yoga therapy, Maryland University of Integrative Health

If you have no faith in God, then you can go through the procedures mentioned there [in the Yoga Sutras, which provide] provisions for that: Do your pranayama [breathwork], your meditation, try to develop one-pointedness, and then try to understand True Self. None of them requires belief in God….But if you believe in God, [you’ve] got additional support, additional help.
—Srivatsa Ramaswami, author of books including Basic Tenets of Patanjala Yoga and Yoga for the Three Stages of Life, as quoted on Wild Yogi

The confusion about whether yoga is a religion arose in our culture because the practices evolved over thousands of years in the context of the spiritual and religious traditions of India. When these teachings were first transmitted in the West, they were often taught by teachers who were also practicing one of the many forms of Hinduism, Sikhism, or Buddhism.

Yoga is a science aimed at understanding the mind-body relationship, as well as calming the mind to incur less mental/emotional suffering. In their original contexts, the teachings of yoga have no theological orientation. The practices of yoga, when correctly taught, will help anyone of any religious tradition deepen their own faith—it is often said that the practice of yoga can make a Catholic a better Catholic, a Muslim a better Muslim, a Buddhist a better Buddhist, etc. For this reason, we find practicing Buddhists, Christians, Hindus, Jews, Muslims, atheists, and non-theists among the countless yoga enthusiasts around the world.
—Caroline McCarter, C-IAYT, author of Yoga Life: A Workbook of Authentic Practices